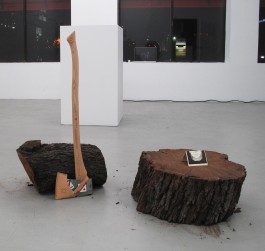 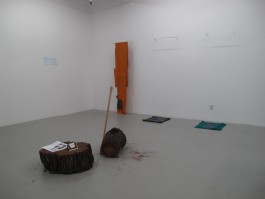 The show in Los Angeles is the last step in a series of APOGEE previews and features various aspects of isolation and laziness in an urban context. The monotonous and alienating effect of isolated housing is a main theme in the whole exhibition.

Gökce Suvari is going to realize some impossible maze wall drawings which combine modernist architecture and dead-end possibilities of finding your way in this pre-organised systems.

Ana Barrado photographed the rockets in Cape Canaveral in 1988 and created futuristic images that have appeared in J.G. Ballard's story collection "The Atrocity Exhibition" published by RE/Search.

The American Felling Axe that Elmar Hermann uses in his installation at JB Jurve is an icon of American wildlife romanticism. A perfect example for taking cultural evolution radically serious. Every  feature of this axe was meticulously designed for uselessness which turns a woodland tool into a general symbol for snobby weariness. 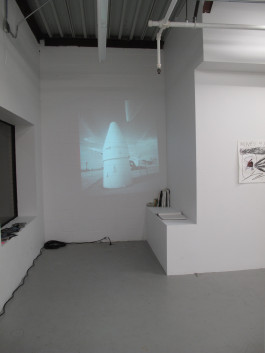 A famous yoga teacher once said: "If you don't have anymore, maybe you don't need it anymore.“ - a sentence that inspired  Berlin based artist Klara Adam to use it as a title for a very fragile model of a

Maki Umehara: "I‘ ve decided to live and travel in foreign countries during my life, to be dislocated and represent myself as a performer and as a moving object, which would bring a new meaning and communication to the communities in which I live." An installation "Homes in Mum-Bay" is presented at JB Jurve as decoration of villa in India, where private and public spaces seemed to be often placed together.

WJM Kok´s "Untitled (As Long As The Grass Grows)" is out of a series video pieces in which difference is provoked by using visualizations from a standard computer software music player. The video also seems to act as a screensaver, which appears when a computer falls to sleep mode due to a lack of interaction.

Joe Baiza is a punk rock and jazz guitarist who lives in Los Angeles. Baiza is a founding member of the bands Saccharine Trust, Universal Congress Of, and The Mecolodiacs. At JB Jurve Baiza performs a solo setup during the opening night. 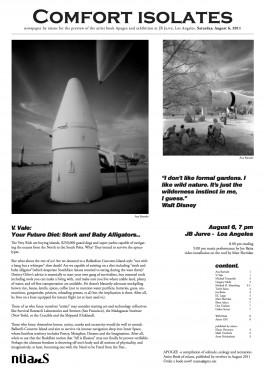